It takes a lot of different moving parts and mechanical systems, all working together, to get your vehicle to run and move for you. One of the most important parts under your car’s hood is the alternator, though it’s an oft-misunderstood piece of equipment. The alternator essentially provides electricity to all of the different systems of your vehicle while it’s running – including the engine, everything around you in the cabin, and even the battery. While the battery gets everything going when you first start your engine, after that, the alternator takes over and keeps it running.

Whether you’re looking to work on or rebuild a vehicle yourself, or simply want to know what your mechanic is talking about when you go in for service and repairs, it’s important to know about the different parts of your vehicle. The more you know, the better prepared you are for the work you plan to do or for conversations with your car-care professional. So today, we’re going to take a look at the alternator in your vehicle and learn what it does, how it works, and what can go wrong with it. I’ll also briefly go over some of your options when it comes to determining if your alternator is failing, and what you can do to fix it.

What is an Alternator, and What does it Do?

First things first: the alternator is a piece of machinery located on your engine that provides electricity to other parts of your vehicle – it’s essentially a generator. It works much like any other generator to provide usable electricity for your vehicle. Now, you might be thinking, “But isn’t that what the battery does?” And the answer to that is “yes” – but only sort of.

You see, when you get into your car, insert the key (or push the button), and start your engine, that’s your battery at work. That initial moment when you first start your vehicle, the battery provides the electricity for the engine to start up and everything to get going. That’s why you can’t start your vehicle without a battery or if your battery has died – and why a jump start from another vehicle can help you get things going.

After that first burst of energy to get things started, however, your battery is essentially done for the day (or at least until you need to start your car again). From then on, while your car is running, it’s the alternator actually providing electricity to all of the different parts of your vehicle. That includes the engine plus all of the systems inside and outside of your car: the lights, windshield wipers, speakers, and everything else that needs power. In fact, the alternator even sends energy to the battery to keep it charged for the next time you need it. 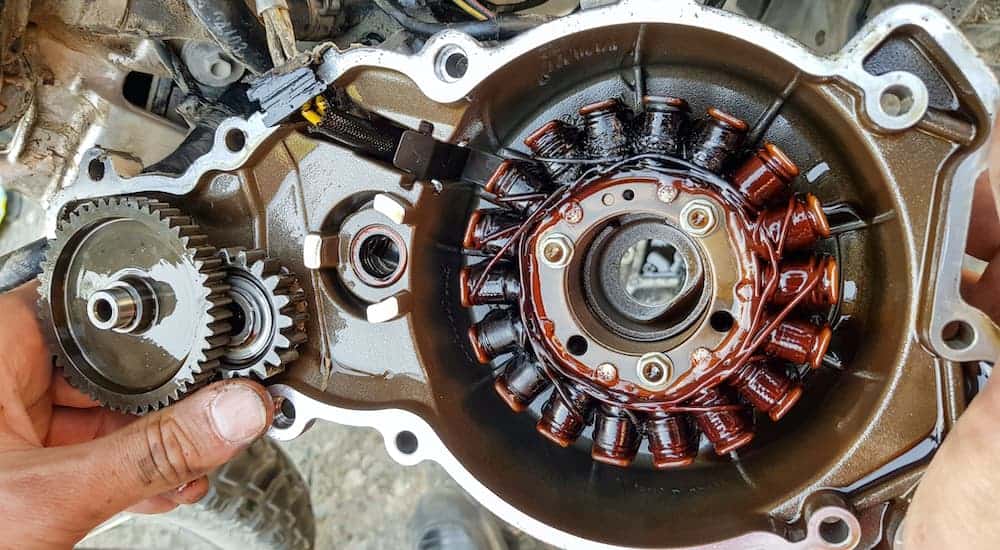 How does an Alternator Work?

The basic idea behind an alternator is that it converts energy from mechanical moving parts into electricity that can be sent to other parts of the car. Without getting too much into every detail, picture it as a pair of rotating elements – an outer piece that looks like a ring, around an inner circular part. The inner part is called the rotor or rotor assembly, and the outer ring around it is called the stator. With me so far? Good.

The rotor – the inner part – is connected to a pulley located outside of the alternator, which has a belt wrapped around it. This is called a serpentine belt, and you’ve probably heard that term before. As your engine runs, a certain amount of mechanical energy from it is used to turn the serpentine belt, spinning the alternator pulley and the rotor inside the stator.

When in use, the rotor is energized and turned into a magnet – as it spins within the stator, this creates an electric current in the stator, which is converted from alternating current to direct current by a set of diodes. This direct current is then sent from the alternator to different systems in your vehicle to provide them with energy, using a voltage regulator to ensure nothing is overloaded or fried.

What Can Go Wrong with an Alternator?

An alternator will typically last you about a decade without any major issues, though there are some things that can certainly go wrong. Perhaps the most common issue is the serpentine belt becoming worn or damaged, which then won’t spin the rotor so the alternator won’t work. External damage to the alternator can also keep it from working, just like any other piece of machinery, though such instances are fairly uncommon.

More common, however, is internal damage that keeps it from functioning properly. Since the alternator consists of moving parts, there is a fair amount of heat buildup within it, and it requires cooling and airflow. This leaves it exposed, and water can splash from underneath your vehicle and get into the alternator. While a little water is not necessarily a problem, it can cause issues and keep your alternator from working properly. If parts of the rotor or stator become damaged, dirty, or worn, then your alternator might not work correctly or can produce less energy than it should. 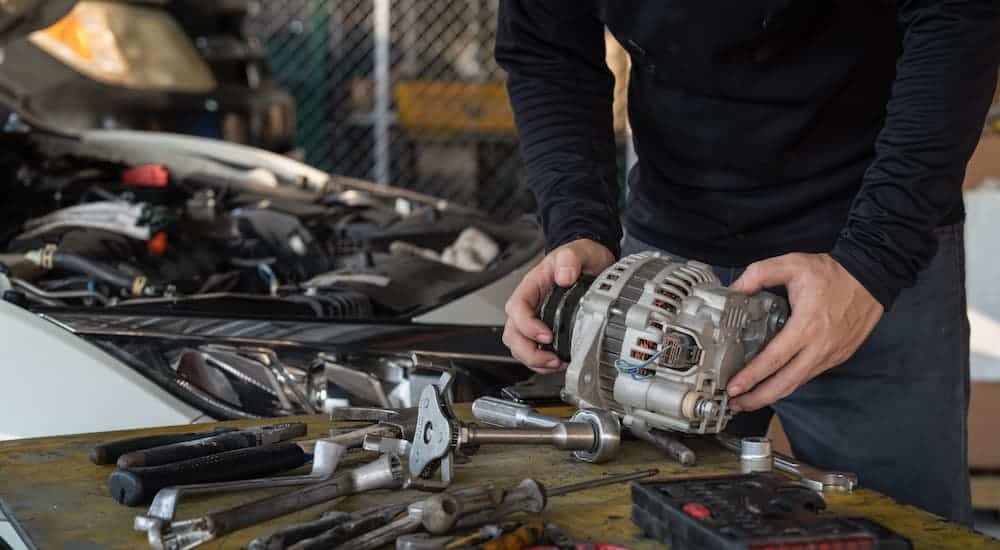 Recognizing a Problem with an Alternator

There are a few different warning signs you should watch for that can let you know when you have an issue with your alternator. Since it provides electricity to other parts of your vehicle, you can often tell when something is wrong through them. For example, if you notice your interior lights are dim, or your headlights are dim, or if electrical systems stop working inside your vehicle, then you may have an issue with your alternator.

Similarly, finding you routinely have a dead battery might mean your alternator is not working properly. While your battery can only be recharged so many times and will eventually need to be replaced, if it is constantly dying on you, then the problem might be that the alternator isn’t providing it with enough power to recharge properly. Similarly, if your engine starts, but then has a hard time continuing to run, it might mean there’s something wrong with your alternator since it can’t keep it going after the battery does its job.

Options for Repairs and Replacement

You typically have three different options for fixing an issue with your alternator. A replacement is often the most expensive option, but can also be the quickest and easiest choice when you work with a mechanic you trust. Replacing your serpentine belt is relatively quick and not incredibly expensive, though replacing the entire alternator isn’t cheap – particularly if you choose an OEM one from the manufacturer.

Your second option is to have the alternator removed and repaired. This usually means having your mechanic remove it and send it to another shop for repairs – unless you go to a facility that handles alternator repairs in-house. A repair can be a great fix and will usually be quite a bit cheaper, but it will take longer than replacing it, and you will need to find a shop that can do the work.

Finally, you can always replace or repair your alternator yourself. You can buy an alternator repair kit for a very reasonable price, and it’s something that most anyone can learn to do. It does require a bit of work, however, so make sure you’re up to the task before you get started. But knowing, firsthand, that your alternator is in the best shape possible and replacing or repairing it yourself can be very satisfying.