Some motorists might think that brake fluid isn’t as important as oil and fuel, but it’s actually extremely important. The right kind of brake fluid can make all the difference when it comes to the stopping performance of your vehicle. Part of what may get some people hung up on the kind of brake fluid they should use is because it’s not necessarily about the brand but rather the DOT grade. If you’re unfamiliar with the DOT system and how brake fluids are categorized, this article will break down the categorizations and how they apply to your vehicle. This way, the next time you head into a tire shop to get new tires, new brake pads, and replace the brake fluid, you’ll have a better idea of what to look for and why.

In America, DOT is an acronym for Department of Transportation. For international ratings, they use ISO, short for International Standards Organization. These are the abbreviations for what’s used to classify different brake fluid grades. Obviously, those living and driving in America will be using the DOT system when replacing or refilling the brake fluid in their vehicle.

DOT grades go from DOT 2 up to DOT 5.1. In between, there is DOT 3, DOT 4, and DOT 5. The grades relate to the boiling point and composition of the different brake fluids. Before hydraulic fluids were used in vehicles for braking, drum brakes with cable wire and brake shoes were the standard. In the early days of hydraulic-based brakes, butanol, castor oil, and ethanol were all used up through the DOT 2 era of brake fluids.

Newer vehicles are typically designed to use DOT 3 or DOT 4 and sometimes DOT 5.1 brake fluid. You might be wondering why DOT 5 is rarely listed as a means of keeping your vehicle’s brakes tuned and functioning? Well, that’s because it has to do with how each DOT grade is classified based on the mixture and their purposes for different vehicles. 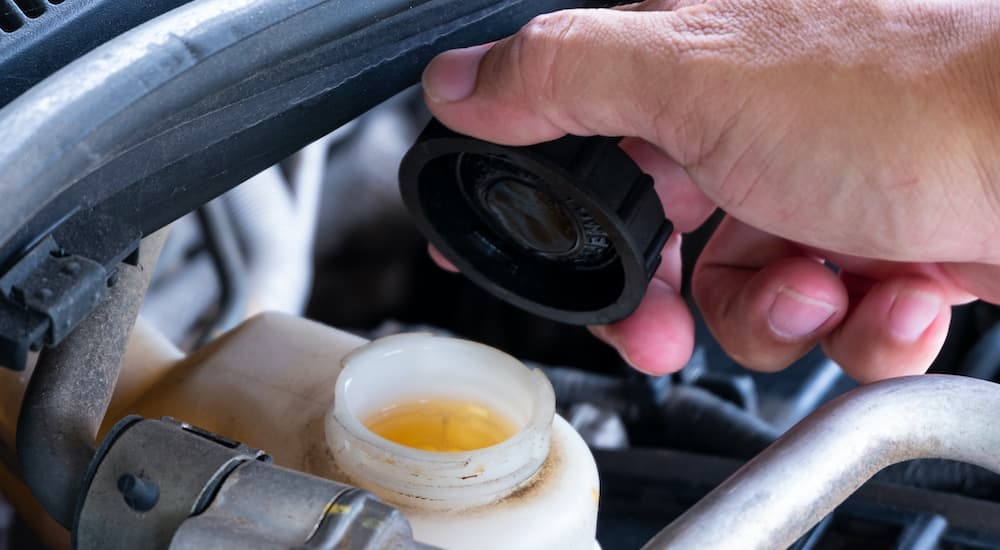 DOT Materials, Components, and Why They Matter

The different DOT grades of brake fluid relate to their temperature ratings and components. The higher the grade, the higher the boiling point of the fluid, which means the fluid is less likely to turn to steam and stop working from the heat generated under sustained hard braking. DOT 2 fluid, which isn’t used in modern vehicles, has a dry boiling point of 374 degrees Fahrenheit and a wet boiling point of 284 degrees Fahrenheit. Those may seem like pretty high numbers, but they are significantly lower than the more modern brake fluids.

Which Brake Fluid Is Right for My Vehicle?

While DOT 5 might seem like the best of the bunch, this is not the sort of brake fluid you will want to pick up from the local tire shop for your vehicle if you have anti-lock brakes because DOT 5 silicone is not compatible with anti-lock braking systems. Why? Because it’s due to the intermittent pulsing nature of anti-lock brakes. This creates gaps in the way the silicone is delivered through the system, creating pocketed air bubbles that reduce the efficiency and reliability of the overall braking system. DOT 5 does have its place, but it’s typically not for regular road usage on production vehicles driven in America, especially if they have anti-lock brake systems.

Most vehicle service manuals will also suggest what kind of grade of brake fluid to use, and it will occasionally be written on the brake fluid reservoir cap as well. Basic road vehicles will get by with DOT 3 or maybe DOT 4 brake fluid. Typically if the vehicle requires more aggressive braking because it has a powerful engine or has to slow down a lot of weight, then DOT 4 brake fluid will be required. At the top end of the spectrum for high-performance production vehicles, you might need DOT 5.1 brake fluid for the vehicle.

If you have a vehicle where you’ve hit up the tire shop for high-performance tires to match a high-end turbocharged engine or V8, and you need a lot of instant braking power, then you’ll need high-performance brake fluid. Why? Because the more aggressive you brake with a vehicle, the more heat the calipers, rotors, and pads generate. The hotter the brakes get, the more that heat transfers to the brake fluid, and if the fluid grade isn’t high enough, you run the risk of it exceeding its boiling point and evaporating. When the brake fluid evaporates, your brakes will no longer work. Most brake fluids have the grade and boiling points on the packaging. This will give you an idea of what kind of temperatures they can withstand. When it’s time to replace the brake fluid, it’s best to fully drain the old fluid to make sure that the fresh new fluid can completely fill the system. This is particularly crucial when you are changing types of brake fluids, even though it is technically possible to mix DOT 3, DOT 4, and DOT 5.1.