Listen up class, today we are going to dive into the wonderful world of differentials. Now some of you might be thinking that a powertrain starts with the engine and ends with the transmission, but that would be a mistake. In fact, differentials are one of the most important and least appreciated aspects of powertrain design, and changing the type of differential can have a massive effect on performance and handling even while the rest of the car or truck stays the same.

Before we get started, you might be wondering: what is a differential, and how could such a seemingly inconsequential part play such an important role? So let’s get some basic engineering information out of the way before we really get started.

A differential is a type of gearing that takes power and splits it multiple ways. The most important automotive use of a differential is splitting the longitudinal power of the driveshaft laterally between the driven wheels. However, differentials also play an important role in all-wheel drive systems, apportioning power between the front and rear axles. Without differentials, there would be no way to get power from the transmission to the wheels.

The Subtlety of the Differential

While a differential might seem like a pretty straightforward, if important, piece of machinery, their real subtlety and value come when you take a closer look at how they work. You see, differentials (at least the vast majority of differentials) don’t just split power evenly between the wheels. If they did, you would have some real handling problems doing anything other than traveling in a straight line.

When a car moves around a corner, the outside wheel has to rotate faster than the rear wheel in order for them both to travel smoothly along the road. If they both rotated at exactly the same speed, then one of the wheels would have to be skidding along the road surface in order to keep pace with the other. Your standard car differential (known as an “open differential”) uses spider gears that allow for that difference in rotational speed, keeping both driven wheels rolling smoothly along through even the tightest corner.

If you have ever driven in snow or ice or tried going off-road in your average vehicle, then you have probably experienced a phenomenon where one of your driven wheels spins fruitlessly while the other doesn’t move at all. This is the weakness of the open differential. When your wheels are on surfaces that provide different levels of traction, the standard spider gears make it so that the wheel with LESS traction gets MORE power – the exact opposite of what you need to get moving when you’re stuck in snow or mud.

Now automotive engineers wouldn’t be doing their jobs if they simply ignored such an obvious flaw in the design, and there are actually a large number of different differential designs that work to ensure power is being sent to the wheels that can actually use it rather than being wasted.

The most common method is Traction Control – this electronic system simply applies the brakes to the wheel the isn’t moving, artificially creating traction and shifting power between the wheels (you can actually simulate this yourself even if you don’t have traction control simply by lightly pressing the brakes as you hit the gas). However, because traction control uses the brakes, it is robbing power and is usually only helpful in the mildest of challenging situations. The real solution is an upgraded differential. 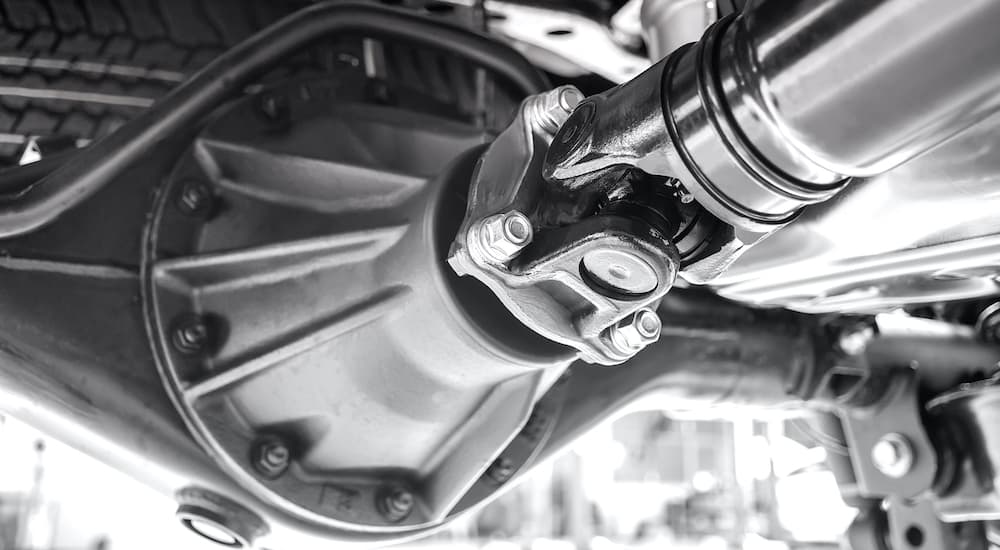 The simplest and most common differential upgrade is actually a family of different options, collectively known as “limited slip differentials.” The four main types are viscous, torsen, clutch pack, and computer controlled. However, all three function in a similar manner – when one wheel starts spinning much faster than the other, they activate and shift some of that power to the wheel that isn’t getting any.

Viscous differentials are arguably the least capable form of limited slip differentials. Similar to the torque converter in an automatic transmission, they are filled with a liquid that generates friction when the wheels rotate at different speeds. This helps to shift power between the two wheels but doesn’t activate instantly and does not perfectly equalize power.

Torsen (which stands for TORque SENsing) differentials are the next step up and are commonly found in sports cars and performance trucks because of their extremely predictable and reliable handling. They are purely mechanical, using a more complex collection of worm gears that instantly transfers power to the wheel with the most traction. However, if the difference in traction is too great (the exact ratio will depend on the differential but can be quite high – 4:1 is fairly common), then a torsen differential will stop working and function as an open differential.

The above three options are all purely mechanical systems, but computer-controlled limited slip differentials are becoming increasingly popular in high-performance models. They are generally clutch pack units, but the computer decides when to engage and disengage the clutches, improving performance. However, you need to pay close attention here – many models will advertise a computer-controlled simulated limited slip differential, which is nothing more than a fancy name for traction control.

As we mentioned in the beginning, it is important that differentials allow the wheels to spin at different speeds, but there are some exceptions to this rule. When it comes to the most challenging off-roading situations, whether dealing with mud or crawling over boulders, even a limited slip differential may prove insufficient to keep the vehicle moving forward. This is where “locking differentials” shine.

As the name suggests, a locking differential (or “locker”) physically locks the two wheels together, forcing them to turn at exactly the same rate. Even if one wheel is on pure ice or lifted high into the air, power will continue to be applied evenly to both wheels. Lockers are what separate the best off-road vehicles from the also-rans, but they should never be used on high-grip surfaces as they will put added stress on your tires and drivetrain. Fortunately, most factory vehicles come with manually selectable lockers, allowing the driver to use them as open differentials on the road and then activate them when it comes time for off-road adventures.

The final type of differential is the “welded differential,” and it is just as drastic as it sounds. Generally only found on dedicated drift cars, a welded differential has the gearing physically welded together to create what is in effect a permanent locking differential. This makes it easy for the car to lose traction in corners, which is generally a bad thing for most drivers but exactly what some people are looking for. Take a Moment to Appreciate Your Differentials

While we could go on for pages describing the exact effects on handling and performance of different differential types or detailing the finer workings of how they function, we will have to leave our further exploration of this underappreciated automotive component for another day. For now, we will simply suggest you take a moment to appreciate everything your differentials do for you every time you get behind the wheel of your car – especially if you are lucky enough to have something more capable than the standard open differential.